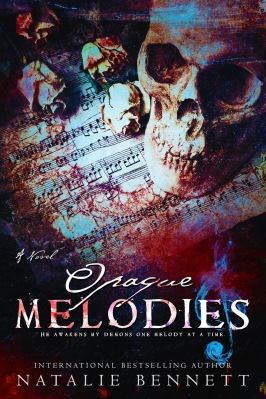 Alaric Schuyler.
He’s enigmatic, cocky, and my new brother-in-law.
With eyes the color of cerulean blue and a smile so beautifully devious he could entice the devil to do his bidding, I should have known to stay far, far away from him.
One night changed everything between us.
He’s become the star of my nightmares, always lurking in the shadows.
I’ve become his muse, a possession he won’t let go of.
One esoteric melody at a time, he awakens my demons’.
Lucid dreams and sick fantasies show him being the death of me.
And the more time I spend in a reality where sanity has ceased to exist, I find myself wanting nothing more.

Opaque Melodies by Natalie Bennet tells the story of Catalina. She is a mentally disturbed woman with an overbearing mother. An illegitimate child who has never known her father’s love now finds herself forced into going to California to go through her deceased half sister’s possessions. Her brother in law aka Alaric who she discovers is not an old rich guy but a greek god with blue eyes and is extremely wealthy insist she come. Upon arrival she believes something isn’t quite right with the brother in law. He doesn’t seem to be upset over his dead wife and he appears to be throwing off sexual vibes which Catalina is already feeling herself for him. However by the time she figures out she should leave, she in way over her head and it is to late. Catalina has fallen down the rabbit hole and isn’t quite sure what is real and what isn’t. In true Natalie Bennett form I was taken to the land of sick, extremely dark and extremely twisted. The sex is too with a taste of brutal. Loved it. I always question my sanity after reading her stories. I can’t get enough of it. I get so drawn into the story I am salivating for the next book. So much going on I don’t know what is real. What is in her mind or what Alaric is trying to make her believe. Brilliant!!! 5 stars for me. 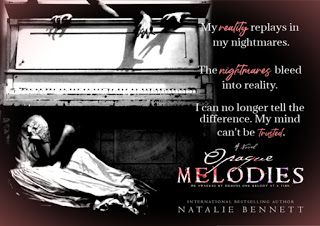 With a penchant for (writing) villainous immoral men, and a tendency to deviate away from traditional happily ever afters, Natalie Bennett is an international bestselling author of twisted and unconventional love stories.
When she’s not slaying words she’s somewhere in the sunshine state, happily taking life one curve-ball at a time.

SERIES #SALE Binge read the Savage Trilogy by @LisaReneeJones now! Book one is 99 cents, book two is $2.99, and book three, SAVAGE LOVE is out in TWO WEEKS! Get the full trilogy here → http://bit.ly/2oC1c2r Visit savagetrilogy.weebly.com to grab your copy! ABOUT SAVAGE LOVE: The third and final book in the Savage Trilogy... They say all is fair in love and war, but I really don't give a damn about fair. In fact, when protecting those I love, fair is the last thing on my mind. Now that I'm back in Candace's life, those who have used her to try to control me, may well put up a final fight, but they will not win. They will lose and badly. #booksofinstagram #bookstagram #oneclick #amazon #kindlebook #romance #booklove #bookish #mustread #igreads #sale #savagetrilogy #99cents