Curvy girl, Josie Decker is determined to make a new life for herself. She’s putting the past behind her, she knows who she is and is satisfied with the life she has carved out for herself. Little does she know what fate would have in store for her when she ends up crossing paths with a childhood friend who has made his billions in corporate America.

Chance Reynolds remembers the days when Josie was the only thing that made his foster home feel safe. He knows she has physical and emotional scars, and a belief that she is unworthy of love. But this time, in this place and in his arms, he intends to be the soul-healing sanctuary this beautiful woman needs.

Can He Move Past The Pain & Open His Heart?

Sam Booth is an Afghan War Vet who suffered wounds from fighting for his country and carries even deeper battle scars from his childhood. He never thought he could find someone who could love him, all of him, that is.

When he meets the lush woman of his dreams, he is astounded to find that Josie is the woman that his best friend, Chance Reynolds, believes they could share in a triad relationship. But is he really worthy of the love that is being offered?

Is A Love Like Theirs Too Good To Be True?

This was previously published in 2014 as Trusting Chance. It has been re-edited and 15,000 new words have been added to the story.

Theirs To Treasure: Happily Ever After by Caitlyn O’Leary

Theirs to Treasure: Fate Harbor Series is book 1.
Thank goodness for Foster parents Betty and Butch. They fostered many children in their home including Chance Reynolds, Josie Decker and Sam Booth.

Betty and Butch moved to Fate Harbor a town of triad relationships. Josie catches up with Betty and Butch long after she was grown and that she had raised her 2 sisters. Who are now college age. It’s now time for Josie. Josie moves to Fate Harbor where she now has a new business. Chance moved to be close to his foster parents that were more parents to him than his own. He has stayed in touch with B & B all along. Sam went to war and got hurt while fighting for his country and he is now living with Chance and back in touch with B & B.

Chance knew that Josie was moving to Fate Harbor and he is ready to start a relationship with Josie. But life hasn’t been the best for Josie and she has self esteem issues. Josie needs Sam & Chance she just doesn’t know it yet. Josie wants to know how this romance will work. Won’t there be jealousy? I guess you will have to read Theirs to know how it works out!

I loved reading their story! It was steamy, hot and romantic. 4.5 stars 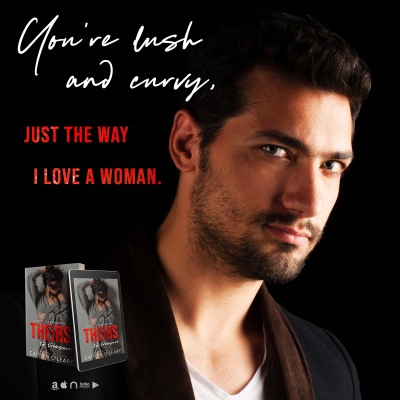 Excerpt
Josie couldn’t stop her response. His words had unlocked something deep within her. She couldn’t remember a time when she could literally lean into someone, and she reveled in it. Her arms lifted to encompass his broad shoulders. God, he felt so hard, so good and strong. Trying to get even closer, she lifted on her toes, and gasped in pain.
He must have felt it in their kiss, and correctly interpreted it. Sam broke away and looked down at her. In one quick moment, he lifted her in his arms and then she found herself settled in his lap on her sofa.
She looked up at him in wonder. “You’ll hurt yourself doing that,” she admonished.
“Baby, you’re just a little thing,” Sam said.
Josie snorted in disbelief.
“Okay, you’re lush and curvy, just the way I love a woman. I can’t stand women who are going to blow away at the first strong wind.”
She snorted.  He was so full of it.
“I’m serious.  Compared to me you are a little thing and you’re the perfect size, with the absolute perfect body. Do you understand me?”
It was difficult not to buy into what he was saying when the evidence of his arousal pressed against her butt.  She made a tiny move against him and he groaned.
“You’re so hot and sexy, and you’re going to end up killing me.”  His hands brushed up the sides of her arms, her neck, then ended up cupping her flushed cheeks.  “Are you finally hearing me?”  He gave her a wicked smile.  “Are you at least feeling me?”
She laughed.
“Exactly,” he groaned.  “Your body turns me on, baby.”
Josie looked up at him and saw the absolute truth on his face. She turned away and nuzzled his neck, not wanting him to see the sheen of tears in her eyes. This man who made her blood sizzle was turning her self-image upside down. A huge weight lifted from her heart.  He held her for long moments, then finally started to whisper.
“I know we’re going to talk about our injuries, but can you please tell me how such a beautiful woman could think she needed to hide in clothes four times her size? How she could think that she wouldn’t have men falling at her feet?” Josie couldn’t help giggling at the outrageous statement.
“I’m serious, baby. At least a quarter of your male customers are coming into Sweet Dreams Desserts not just for the pastries but to see the sights.”
Oh Lord, I could fall in love with this man.
Sam tilted her head so she was forced to look at him. “Let me guess, it was some guy who convinced you that you, you were less than perfect.”
She shook her head, then hid her face in his neck.  “Not just a guy.”
“Look at me, honey.  Tell me,” he urged.
She looked up.  “Actually, it started way earlier than that. My mom was one of those women who would blow away in the wind, and she was constantly harping on my weight. So, it’s pretty much ingrained that I’m fat.”
“It sounds like she had some issues.”
Josie’s laugh sounded sad even to her ears.  “Issues.  Yeah.  You could call them that.”
“And the guy?” Sam prompted.
“It was a few years ago.  He seemed okay.  I thought he liked me.  I really did, Sam.”  Josie struggled to keep her voice steady.  “Anyway, when we finally got ready to sleep together, I guess you could say he wasn’t all that impressed with my body.”
She stopped talking.  Sam stroked his hand down her back.  She was acutely aware that he could feel the outline of her corset.  Therein laid the problem.  “Russell insisted the lights be turned off.”  Josie stared at a point over Sam’s shoulder so she didn’t have to see pity in his eyes.
“That guy is an idiot.  You’re gorgeous.”
“You don’t know,” she protested.
“You forget, I’ve seen you.  And I liked everything I saw.”
Once again, he turned her face, and she ended up looking up at him, and what she saw was anger.
For just an instant, she was scared, and he must have seen it.
“No, Josie, I’m not angry at you.  I’m angry at your mother, and that asshole.  Trust me when I say that I completely understand a parent belittling you, boy do I get that, but what I can’t wrap my head around is understanding the asshole’s issues. If I was lucky enough to get a chance to make love to you, I would want all the lights on. I wouldn’t want to miss a thing.”
A full body shudder ripped through her body.

Who am I? I’m the woman married to John, daughter of Pat and Vicki, and sister to three brothers and one sister. I’ve been writing professionally for six years, have written over thirty books and am a USA Today Bestseller. But the truth? The absolute truth?

I’m just a book junkie. I love, love, love to read. I read every Nancy Drew and Hardy Boys book, but Trixie Belden was my favorite. I read the World Book Encyclopaedia set when I was in middle school and had pneumonia. Books have been my escape and saviour on many occasions.

It’s my hope that my books can bring you happiness. That’s it. Can you grin? Can you be uplifted? Can you be entertained? Will they make you think about life a little bit differently? Then Yay! Be sure to keep in touch, I actually answer my e-mails. caitlyn@caitlynoleary.com