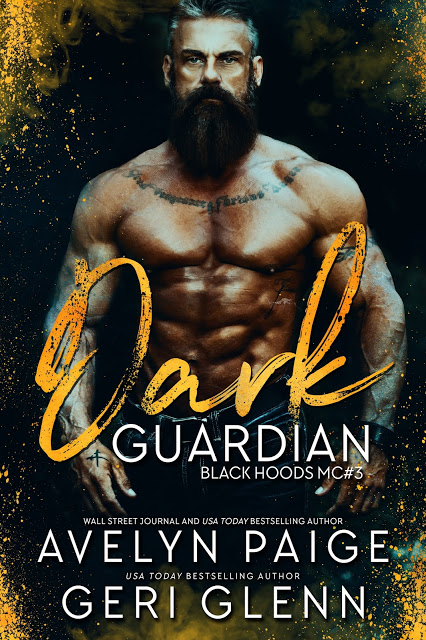 Grace Halfpenny has devoted her entire life to her career as a social worker. Always playing by the rules. Always going all in. Falling in love is the last thing Grace had time for.
Eugene “Judge” Grant is the president of the Black Hoods MC. A hardass son of a bitch, thanks to the scars of his past. Love is the last thing Judge believed in.
Two people on two very different paths.
Until…
Two kids, orphaned and alone with a past that mirrored Judges’ own, come along, not only needing him, but Grace too.And when the kids’ dark past comes looking for them, Grace and Judge must put their differences aside in order to save them.

Dark Guardian (Black Hood MC # 3) by Avelyn Paige, Geri Glen is the story of Judge the president of the MC. We got the beginning of this story in book 2. Now the kids have adjusted to being with Judge and are thriving after all they have been through.  Starting school has put them on the radar of child services. Grace is a workaholic social worker whose life only consist of her clients and a old homeless man she spends time with on Fridays. The real story begins when Judge and Grace meet. She is determined to take the kids and place them in a suitable home and Judge is not letting anyone take away his kids. When the birth father makes his desires known, it takes this story in a different direction. Grace is leery of the dad and knows something is off. I really enjoyed the characters in this story. When I started this book I didn’t put it down till I finished it. Started Saturday morning and finished early Saturday afternoon. This story definitely took me on an emotional rollercoaster. I was taken on many highs and lows. At one point I gasped out loud. You will know when you get there and I didn’t see it coming. Yes the story was pushed back a bit. It was well worth the wait. I am so looking forward to the next book. Was left on a high/low that has me salivating for the resolutions in book 4. 5 stars for me.

Catch Up On The Series
Dark Protector 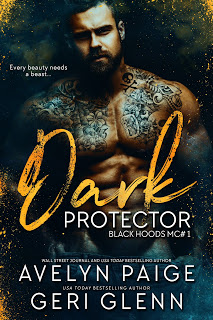 Blair’s life isn’t perfect, but she has a plan. Find a new roommate, finish school and finally start the future she’s been working so hard for.
And then he knocks on her door. One unwanted visitor is all it took to crush her reality and leave her living in fear. But at least she’s living, thanks to the help of a good Samaritan.
A very sexy, tattooed and motorcycle-riding man with a dog that looks as savage as he is sweet. GreenPeace saves her. He makes her feel safe. He makes her feel a lot of things she’s never felt before.


But, the danger’s not over. Her attacker is still there, lurking in the shadows and waiting to strike again. GreenPeace will put his life and his club on the line to save the captivating woman that’s stolen his heart. But even that might not be enough.

Years ago Shelby Dawson fled, with nothing but a broken heart and a baby on the way. She never expected to see him again. She sure as hell never wanted to need him.Until her daughter meets the wrong man online.Until her daughter is taken.When Shelby shows up at the clubhouse, drenched in rain and crying over her missing daughter, he wants to hurt her like she’d hurt him.But when he discovers the missing daughter is his, he’ll rain down hell on whoever took her, and he might just find redemption in the process.

Avelyn Paige
Avelyn Paige is a USA Today and Wall Street Journal bestselling author who writes stories about dirty alpha males and the brave women who love them. She resides in a small town in Indiana with her husband and three fuzzy kids, Jezebel, Cleo, and Asa. Avelyn spends her days working as a cancer research scientist and her nights sipping moonshine while writing. You can often find her curled up with a good book surrounded by her pets or watching one of her favorite superhero movies for the billionth time. Deadpool is currently her favorite.
To learn more about Avelyn’s books,

Geri Glenn
Geri Glenn writes alpha males. She’s a USA Today Best-Selling Author known for writing motorcycle romance, including the internationally bestselling series, the Kings of Korruption MC.
She lives in the Thousand Islands with her two daughters, one big dog and one terrier that thinks he’s a Doberman. Before she began writing contemporary romance, Geri worked at several different occupations. She’s been a pharmacy assistant, a 911 dispatcher, and a caregiver in a nursing home. She can say without a doubt though, that her favorite job is the one she does now-writing romance that leaves an impact. She loves homemade cookies, copious amounts of coffee and Diet Coke by the case.

To learn more about Geri’s books,