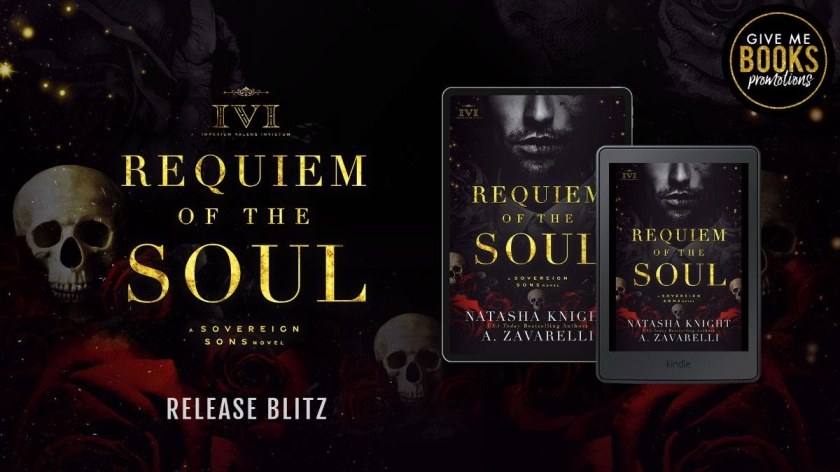 Title: Requiem of the Soul
Series: The Society Trilogy #1
Authors: Natasha Knight & A. Zavarelli
Genre: Arranged Marriage Dark Romance
Release Date: March 23, 2021
BLURB
I was born with noble blood in my veins.
Heir to a powerful dynasty.
Wealth. Power. Aristocracy.
Temptations too dangerous to resist.
Until someone tried to steal it all.
Scarred and broken, I emerged from the flames.
Now I’ve returned to take what’s mine.
Revenge.
The first item on my agenda?
Make Ivy Moreno my wife.
Second?
Bend her until she breaks.
ADD TO GOODREADS

Requiem of the Soul by Natasha Knight
Tanya Rae’s rating: 5 of 5 stars

Requiem of the Soul is the first book in The Society Trilogy. And knowing that it is the first book, there is a doozy of a cliffie! Fortunately the next book will be due out around a month after this book is posted!

I was sucked into this book, like a tornado. Slung around in the vortex and spit out to a cliffhanger of an ending. Requiem of the Soul is AMAZINGLY GOOD!!!

These 2 authors are amazing too! They wrote this book together seamlessly!

This is Ivy Moreno and Santiago De La Rosa’s story! This is a story of revenge against the Moreno’s and Ivy is the innocent player in all this and she is going to pay for all of the Moreno’s.

I can’t wait, only I have to for the next book in this series and April 20th can’t get here soon enough! 5+ star

Wow. I could not put this book down. These authors did a wonderful job of drawing me in and holding me captive. I never knew if Ivy was going to submit or rebel. I understand Santiago’s pain, but I don’t think he’s the monster he wants to be. There are so many people who has their own hidden agendas, which Ivy and Santiago seems oblivious to. The D/s is hot even when it shouldn’t be. I always love the tortured soul/scarred mc. Santiago is no different. I am rooting for his happiness even if he feels like he doesn’t need/deserve it. I dislike the ending because I need more like yesterday! Cliffhangers are not fun unless you have book two available to start right after. I definitely recommend this book to others. Just beware of the cliffhanger at the end.

Requiem of a Soul (The Society Trilogy #1) by Natasha Knight and A Zavarelli. Ivy belongs to a Secret Society where women are no more than a means to an end. They are told who they will marry. Just so happens Ivy has been chosen by one of the sons of the original families. Any woman in the Society would be honored but marriage is the last thing on Ivy’s mind. Not happy about the fact of marriage she is even more shocked when she discovers she is to marry Santiago De La Rosa. He is not only very powerful but was disfigured in an explosion that killed his father and brother. Santiago has picked Ivy for one reason and one reason only, he wants revenge for the death of his family and his disfigurement. Her father was the one responsible for the explosion as Santiago believes. He has plans for Ivy and her family. Unfortunately his plans seemed to be in trouble when he finally meets and spends time with Ivy. There were quite a few twist and turns to this story.  It was hard to know who did what and why. Many questions were raised and left to be answered in the up coming books. Looking forward to discovering the answers to all my questions. I also am looking forward to seeing what develops between Ivy and Santiago. Will Santiago go through with his initial plan of revenge or will Ivy be able to unthaw his cold heart. The ending through me for a loop and the story has left me feeling some kind of way. All I know I was not happy. An Oh Hell No moment. I do know I am looking forward to the next book. I will will give this story 4 stars inspire of the ending.

A. Zavarelli is a USA Today and Amazon bestselling author.
She likes all things chocolate, books that come with warnings, and putting her characters through hell. Her tales have been known to flirt with darkness and sometimes court it unabashedly altogether. Revenge themes and tortured souls are her favorites to write and this gives her an excuse to watch bizarre and twisted documentaries in her spare time.
She currently lives in the Northwest with her lumberjack and an entire brood of fur babies.
FACEBOOK
FACEBOOK GROUP
INSTAGRAM
TWITTER
NEWSLETTER
WEBSITE
GOODREADS
AMAZON
BOOKBUB 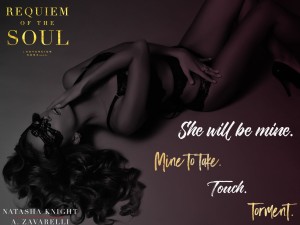