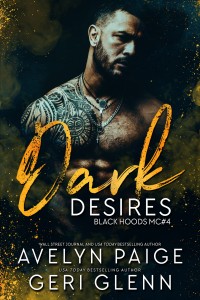 One night destroyed everything.
Lindsey’s heart.
Karma’s body.
Her hopes for the future are shattered.
His purpose in the Black Hoods MC is unclear.
They thought they could weather any storm as long as they had each other. But some storms are too powerful. And some loves aren’t as strong as they may seem.

Dark Desires (Black Hood MC # 4) by Avelyn Paige, Geri Glen. I was excited when this book was offered because I have really enjoyed this series and I was looking forward to the next saga in the MC. I did however have to go back and look at the characters of Lindsey and Karma since it had been awhile since I had read about them. Once I reread what had happened to them I was all set to go. After what had happened to Lindsey and Karma in the previous book they are trying to piece their life back together after the terrible aftermath of their encounter with Henry. Theirs is a story of hurt, pain, emotional and physical struggles. Each needs the other but wounds are deep and to make matters worse the MC is struggling too. A real emotional read with the usual MC struggles. Something is always going on. It seems to get to true love, misery and heartache have to come first. Really enjoyed Lindsey and Karma. Catching up with the gang from the previous books is always a treat. I laughed, I cried, I wanted to wring a neck or two. The ending had me not only laughing but a little perplexed. Definitely wondering what the authors are planning on doing with the next member of the Black Hood MC. Really looking forward to also seeing what will happen with the other characters. A 4 star read for me.

Start from the Beginning…
Dark Protector

Blair’s life isn’t perfect, but she has a plan. Find a new roommate, finish school and finally start the future she’s been working so hard for.


And then he knocks on her door. One unwanted visitor is all it took to crush her reality and leave her living in fear. But at least she’s living, thanks to the help of a good Samaritan.


But, the danger’s not over. Her attacker is still there, lurking in the shadows and waiting to strike again. GreenPeace will put his life and his club on the line to save the captivating woman that’s stolen his heart. But even that might not be enough.

Avelyn Paige
Avelyn Paige is a USA Today and Wall Street Journal bestselling author who writes stories about dirty alpha males and the brave women who love them. She resides in a small town in Indiana with her husband and three fuzzy kids, Jezebel, Cleo, and Asa. Avelyn spends her days working as a cancer research scientist and her nights sipping moonshine while writing. You can often find her curled up with a good book surrounded by her pets or watching one of her favorite superhero movies for the billionth time. Deadpool is currently her favorite.


To learn more about Avelyn’s books,


She lives in the Thousand Islands with her two daughters, one big dog and one terrier that thinks he’s a Doberman. Before she began writing contemporary romance, Geri worked at several different occupations. She’s been a pharmacy assistant, a 911 dispatcher, and a caregiver in a nursing home. She can say without a doubt though, that her favorite job is the one she does now-writing romance that leaves an impact. She loves homemade cookies, copious amounts of coffee and Diet Coke by the case.

To learn more about Geri’s books,