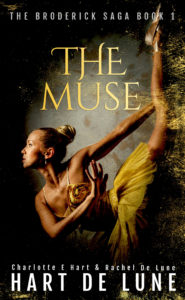 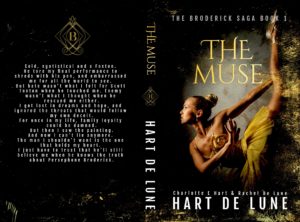 The Muse, book 1 in a new romantic suspense series, The Broderick Saga!

And where better to kick off the series, with the baby of the Broderick family, Persephone. 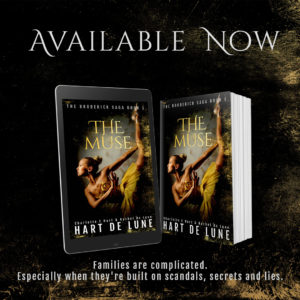 Book One in The Broderick Saga

Pre-Order the rest of the series!
The Lawyer, Book 2 – https://mybook.to/TheLawyer

BLURB
Cold, egotistical and a Foxton.

He tore my final performance to shreds with his pen, and embarrassed me for all the world to see.

I got lost in dreams and hope, and ignored the threats that would follow my own deceit.

For once in my life, family loyalty could be damned.

But then I saw the painting.

And now I can’t lie anymore.

The man I shouldn’t want is the one that holds my heart.

I just have to trust that he’ll still believe me when he knows the truth about Persephone Broderick.

The Muse is the first book in The Broderick Saga. There will be 4 books in this series of Broderick’s. This is Persephone Broderick and Scott Foxton’s story. I have now read several books by this writing duo and have enjoyed Charlotte E. Hart and Rachel De Lune’s books singly. I really enjoy when they write together. They write seamlessly.

Scott is back from Paris to help his father run the paper Foxton Herald. Persephone Broderick aka Seffie Castlewood, her stage name. She is a Ballet dancer and was a Principal for the Royal Ballet. She is giving an interview since she is leaving the ballet company and she meets Scott, he is one of the interviewers from the press. He is very antagonistic towards Seffie in his questioning and the story goes on from there. Wait until he learns her real name isn’t Seffie and who she really is.

This is an enemy to lovers’ romance and there is so much more! Persephone is one of four sisters that will be written about in the Broderick Series.

I loved reading about their story and can’t wait to read the next sister’s romance! The Lawyer is Book 2.

The Muse ( The Broderick Saga # 1) by Charlotte E Hart & Rachel De Lune is a modern day retelling of the old rivalry of the Hatfields and the McCoys. Scott Foxton is a good looking man of a particular age and a brooding artist. He has been called back to London by his father to help with the family newspaper business. In Paris he was happy, now in London he fills his night with too much booze and one night stands. Scott was ok until he met a Prima ballerina while on a story. Seffi Castlewood aka Persephone Broderick wanted to make her mark based on her talent and not her family’s name. An unflattering article written about her final performance has her confronting a Foxton her family’s sworn enemy. However once in the present of Scott she feels and sees something different than their family feud. Scott is surprised to see the Muse to his renewed desire to paint. The attraction is instantaneous. There are a few problems 1 is the age difference, 2 he doesn’t do relationships and 3 he doesn’t know who she really is.  I enjoyed their journey to being together. The struggle Seffi was going through knowing he doesn’t know her real name and her inexperience kept me wanting more. However the ending had me so confused that I had to reread the last 3 chapters inorder to come up with this review. I know I didn’t want to throw the baby out with the bath water. In other words I didn’t want to slam a really good story due to an ending that left me dangling regarding Scott and Seffi’s relationship but set the reader up for the next book. A book I am on the fence as to whether or not I will be reading. The book is going to about the eldest Broderick Landon. He is the stern domineering brother who has not only the weight of living up to the family name but feels the need to keep his siblings in line. Scott and Seffi have him in a tale spin. I personally don’t care for him but he might make for a good story. We will see! I give this book 3.5 which would have been a good 4 if not for the ending.

Add to Your TBR Links

Excerpt from The Muse
And now there’s her. I frown and stare back out into the trail of people milling into the park, still trying to figure it all out. Maybe it’s because she is art. She’s all of those emotive responses tied together for me. The way she moves. The way the light creates highlights on her body. The poised control of those muscles. Even the very nature of the chaste life she’s lived before me seems enveloped in something relevant. It’s all a bundle of conflicting and yet seamless energy. And it’s an energy I don’t know how to move forward with. “Hey,” her voice suddenly says. I blink, turn, and find her leaning on the railings next to me. The very vision of her smiling makes me smile back and stare, eyes running over lines well etched into my mind already. She blushes for some reason and looks at the floor, swirling her foot around the dust. “Dance move?”I ask. “No. Nervous move.”

I snort and grab her hand to tow her into the park. “No need for nerves. We’ve already done the fucking part. You were good at it. Relax.” 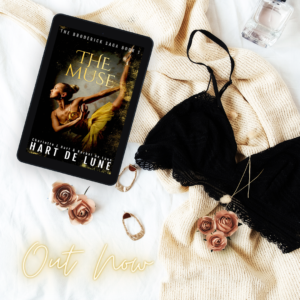