Book 3 in The Broderick Series 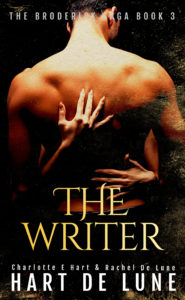 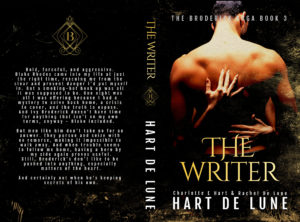 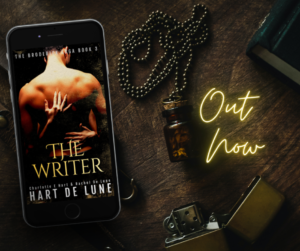 Blake Rhodes came into my life at just the right time, rescuing me from the clear and present danger I’d put myself in. But a smoking-hot hook up was all it was supposed to be. One night was all I was offering because I had a mystery to solve back home, a crisis to cover, and the truth to expose.

And Ivy Broderick doesn’t have time for anything that isn’t on my own terms, anyway – Blake included.

But men like him don’t take no for an answer. They pursue and seize with no remorse, making it impossible to walk away. And when trouble seems to follow me home, having a hero by my side again proves useful.

Still, Broderick’s don’t like to be pushed into anything, especially matters of the heart.

And certainly not when he’s keeping secrets of his own.

The Writer by Charlotte E. Hart
Tanya’s rating: 4.5 of 5 stars

Well now I understand the title of the next book, The Fallen. The Writer does end on a pretty significant cliffhanger. This book, The Writer is Ivy Broderick and Blake Rhodes story. Ivy is the second eldest with Landon being the oldest Broderick.

They meet while Blake is trying to save Ivy’s life. They are in the middle east. Ivy is a freelance reporter and she was supposed to interview Asif Hussain when things went “a little sideways”. Now Ivy needs rescuing and Blake is just the man to do it. Little did she know he was a photographer working with the Army, not for the Army. After-all he shoots those big guns just like he knew what he was doing.

It seems that Blake is the hero again a little later on in the book. He isn’t going to let anything happen to Ivy.

This was another enjoyable book, seamlessly co-written by these 2 authors. I am really looking forward to reading the next book and conclusion , The Fallen, to come out! The Expected publication is September 13th.

The Fallen – Neve Broderick and ?

The Writer (The Broderick Saga #3) by Charlotte E Hart and Rachel De Lune picks up basically where book 2 The Lawyer left off. Kidnapped Ivy finds herself rescued by a group of military guys. One guy among them is Blake Rhodes ex military turned photographer. Good looking and sexy as sin, Ivy is smitten with Blake just as he is smitten with her. So smitten he decides to go back to London to see if something can come of him and Ivy. Both have their own issues and a relationship is something neither one thought they wanted. Ivy also has to deal with the dead author and her family’s problems. Her plate is full. She is dealing with feelings she has not had before regarding Blake. Blake also is dealing with feelings he has closed off for so long. Ivy and Blake have feelings and the sex is next level. Their story is enjoyable. The sex is hot and the lead up to the next book is something I am looking forward to reading. I want more of Ivy and Blake. A matter a fact i would like to know the conclusion to the siblings relationship also the family secret of the Brodericks and the Foxtons. For the last book we finally get to meet the mysterious Neve. Neve is the last sibling. She is the most secretive and elusive of them all. None of the other siblings really know what she does or where she lives. She just pops up. When she does pop up what happened next was something no one ever expected. An oh my moment. Everyone was left in shock, me included. This book was a chance at love along with secrets and lies.  4 stars for me.

Families are complicated, especially when they’re built on scandals, secrets and lies.