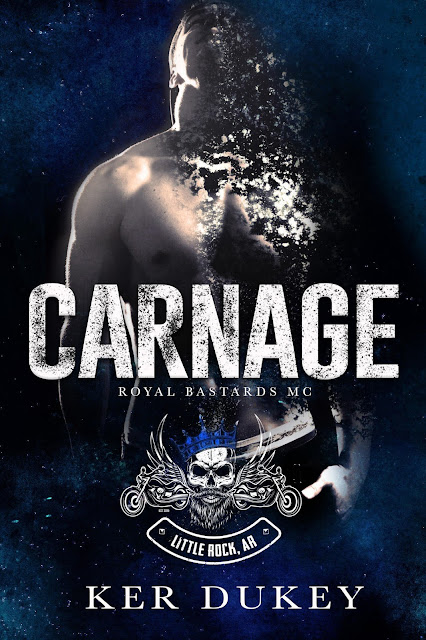 BLURB
Ezekiel “Carnage Creator” Ford.
Brother of the Royal Bastards MC.
Brutality incarnate.
A lone wolf.
The one they call in from the dark when they need shit done—and there’s no one better for the job than me.
I have a tainted soul, oil black, and hungry for bloodshed.
The world is a cesspit. I give zero fucks about it, and it gives zero fucks about me, so when some mafia prick with a vendetta toward our club tries to torture me for sport, the last person I expect to come to my rescue is a small female with a sassy attitude and a death wish.
She’s a complication, burrowing her claws deep into the layers of my fucked-up psyche.
Part of me wants to keep her there, drench her in the very essence of who I am until she’s nothing but a weeping mess, craving the relief only I can give her.
She’s bringing my walls down, showing me maybe there’s some good in the world after all. Until my brothers find us and it’s not me they’ve come for—it’s her.
She’s not who she’s been pretending to be.
She’s the devil dressed in the tight-ass skin of a bitch I’ve become addicted to.
I don’t care who has to bleed for me to keep feeding the habit:
My brother.
Our enemies.
Her.
If she’s not in my bed and on the back of my bike, she’s not going to be on anyone’s. 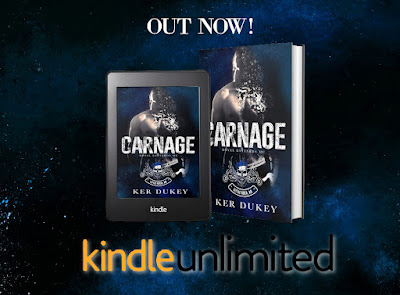 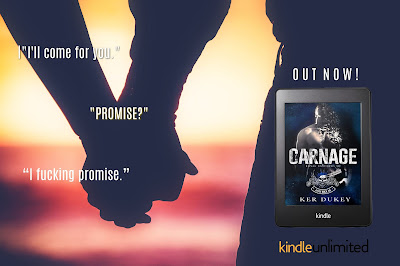 Another bar. Another drink. Another job.
Shifting my gaze around this hovel, a grim line tugs at my lips. The floors are sticky. The mirror behind the bar is cracked and missing pieces. There’s a fucking dog that looks like a rat licking out of a man’s beer glass on the bar top. Cigarette smoke fogs the air, and the reek of piss invades my nostrils. I got a text to meet a brother here. My gut instinct tells me I’ve got the wrong place. This shit hole is in the middle of bum fuck nowhere and looks like it’s run from the cast of The Hills Have Eyes. Lights flicker toward the back where a pool table is situated, making it impossible for anyone to fucking use it. I’ve been in some hell holes, but this one takes the cake.
Finding a table, I begrudgingly sit my ass in the torn-up booth. The green leather seat looks like Freddie Kruger got into a fight with it, half the insides pushing through tears.
A couple guys in the booth next to me share a pitcher of beer while hashing it out in a heated conversation. A barman who looks ready for the grave hobbles up and down, clearing shit away. A man propped up by the bar is either passed out or dead.
I’m about to text the bastard and check if this is the right place when a woman walks in from the back, making me pause. It’s like someone dropped a diamond into a pile of dog shit. A pretty little piece so out of place immediately sends up red flags. Her dark blonde hair spills down her back, ending at a perky ass crammed into a pair of jean shorts. Her face is innocent all for the pouty red lips that scream, “Insert cock here.” Her tits bounce with her movements as she slips behind the bar.
Our eyes clash across the room, her brow puckering as she nods to the barman. He gives her something, and she saunters toward me. Dumping her ass in the seat opposite me, she places a shot in the center of the table between us.
Her pouty lips part, concern drawing down her brows. “You’re a bastard,” she breathes. I half expected her to be toothless—something that would make her fit in here—but she has a full set of pearly whites.
“A little too soon to be determining that. That’s usually reserved for after sex.” I smirk, but she doesn’t even twitch.
Tough crowd.
“A royal bastard,” she clarifies in a hushed whisper. Reaching forward, I take the glass and knock it back as she reaches for my arm to stop me. “You shouldn’t have come,” she says, slightly shaking her head and shifting her eyes to the men in the booth next to us.
Was this a setup? My thoughts melt like plastic over a flame, the room expanding then shrinking in quick succession.
“What the fuck did you give me?” I slur. Fuck. She drugged me. I knew she was a huge red fucking flag.

Carnage (Royal Bastards MC: Little Rock, AR #3) by Ker Dukey. Carnage is a lone wolf for the club. His job is to physically harm people. Killing his mark is a possibility. Someone will get hurt! He loves his job just as much as he loves his brothers. After a job he finds himself in a seedy bar thinking he is meeting one of his brothers. Next thing he knows he is naked and hanging from a meat hook. When Ruby goes to bail out her mother once again. She now finds herself drugging a good-looking biker at a seedy bar to pay her mother’s debt. Somehow, she ends up saving Carnage aka Ezekiel. Hiding out from those who they are both running from. One, Ruby has to keep Carnage alive and get better and two he needs to figure who set him up. Even though this is book three, I had not read the previous books and that fact didn’t take away from this story. I really enjoy this author and this is the first MC series I have read from her. She didn’t disappoint. The attraction between Carnage and Ruby was a journey I loved going on. Carnage has demons that has him seeing himself one way while Ruby sees him another. As they get closer, they are also dealing with finding the rat in the club. An interesting end to this story. I am so looking forward to the next book. Ivy has an interesting past and I can’t wait to discover her secrets. I also plan on reading the 2 previous books. The books are about other members of the MC. From what I have learned about them in this story, their stories should be very interesting.  A 4.5 star read for me.

Of all the books in the series so far this is my favorite. I liked Carnage because it was the darkest to me although it’s not her darkest work. I enjoyed the chemistry between Ruby and Carnage that kept building throughout the book. At times I felt that Ruby was very naïve when it came to her mother. I would definitely recommend this book to others. I am hoping that Ruby’s sister has her own book. I think it may give this one a run for it’s money. Lol. 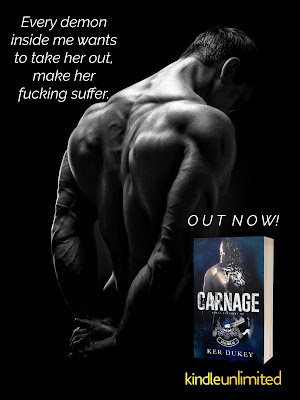 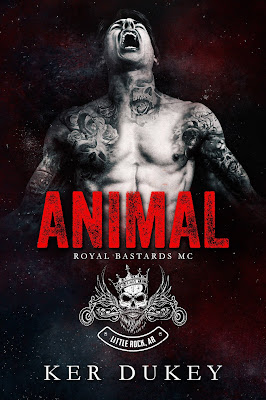 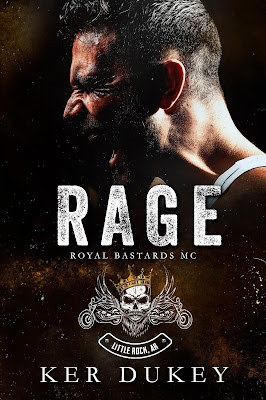 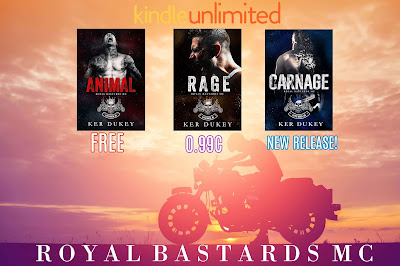 Ker Dukey is an international bestselling author.
Genres include: Dark Romance, Psychological Thriller, New Adult Romance, Romantic Suspense, Mafia Romance, MC Romance and more.
Ker, has over Forty titles published, held multiple #1 bestseller banners and chart-topping titles with the rights sold to numerous countries, translated in multiple languages, and have been adapted into audiobooks.
In addition to being an author, Ker is an annoying wife and a mother of three children + one dog (who thinks he’s human.) She has a passion for reading and binge-watching crime documentaries.
Find her on social media, where she loves interacting with her readers. 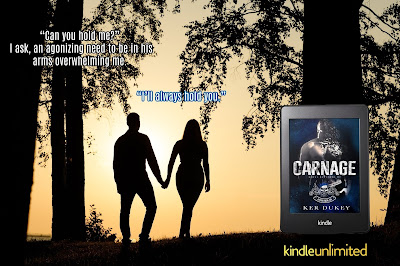