“Nothing is enough to the man for whom enough is too little.” ~ Epicurus

At what age did I begin to question everything?

As far back as I, Donavan Sherman, can recall, I saw the world not through the rose-colored glasses of others—those spectacles worn by the individuals who see what surrounds them and are satisfied—but through vision hued by green.

Life took me along a bumpy path, or better yet, the path I chose led me to encounter obstacles that prepared me to overcome. That journey didn’t sugarcoat the world; it opened my eyes to the true qualities of green—greed, illness, and envy. After all, even Disney surrounds their villains in green smoke. That green hue created the realization that there is always more, always better, and never enough.

I saw, I coveted, I took, and I conquered.

Even with Julia by my side, my quest for more isn’t satisfied. There are people I want to see suffer, but it seems that revenge isn’t a one-way street.

Will Julia pay the price for my sins?

*GREEN ENVY is a full-length novel and book two of the Sin Series that began with RED SIN and will continue with GOLD LUST.

Green Envy is the second book in the Sin Series.  You must read Red Sin first.  What is a “red sin”?

Red is the color of blood, sacrifice, danger, and courage. It’s also associated with heat, passion, and sexuality. When two people meet unexpectedly with an inexplicable attraction that defies common understanding…it can be called RED SIN.

OMG!  What an ending!  Of course since there is a book 3, Gold Lust this one had to end on a cliffie!

Julia and Van’s story continues!  Green Envy picks up where Red Sin ended.  Aleatha certainly had me on the edge of my seat reading this book!  There are some surprises along the way.  Some that I never saw coming and what do you know…. Another cliffie!  But then I expected that when I saw that there would be another book in this series.

Green Envy(Sin Series #2) by Aleatha Romig continues Donavan and Julia’s story. Now Julia is coming into her own now that she is up from under her parent’s pressure. She is trying to save her grandfather’s company along with learning who Van really is as well as his relationship with Madison. As their story continues we learn more about Van and his past. This story is like trying to solve a puzzle. The author is dropping bread crumbs of Van’s life which has this reader guessing throughout the book as to who Van really is and how does his past affect his and Julia’s future. As Julia tries to learn more about her grandfather’s company, she is learning more about herself and her family. By the end of the book we are left with a cliffhanger that I didn’t see coming and some revelations that have me excited for the next book. At the end of this book I had to pick my jaw up off the floor. A 5 star read for me. 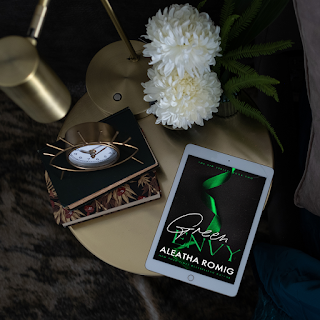 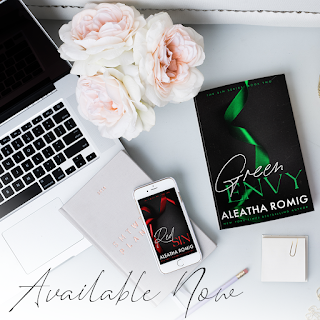 Aleatha Romig is a New York Times, Wall Street Journal, and USA Today bestselling author who lives in Indiana, USA. She grew up in Mishawaka, graduated from Indiana University, and is currently living south of Indianapolis. Aleatha has raised three children with her high school sweetheart and husband of over thirty years. Before she became a full-time author, she worked days as a dental hygienist and spent her nights writing. Now, when she’s not imagining mind-blowing twists and turns, she likes to spend her time a with her family and friends. Her other pastimes include reading and creating heroes/anti-heroes who haunt your dreams and bring your imagination to life!
Aleatha released her first novel, CONSEQUENCES, in August of 2011. CONSEQUENCES became a bestselling series with five novels and two companions released from 2011 through 2015. The compelling and epic story of Anthony and Claire Rawlings has graced more than half a million e-readers. Aleatha released the first of her series TALES FROM THE DARK SIDE, INSIDIOUS, in the fall of 2014. These stand alone thrillers continue Aleatha’s twisted style with an increase in heat.
In the fall of 2015, Aleatha moved head first into the world of dark romantic suspense with the release of BETRAYAL, the first of her five novel INFIDELITY series that has taken the reading world by storm. She also began her traditional publishing career with Thomas and Mercer. Her books INTO THE LIGHT and AWAY FROM THE DARK were published through this mystery/thriller publisher in 2016.
In the spring of 2017, Aleatha released her first stand-alone, fun, and sexy romantic comedy with PLUS ONE, followed by the sweet stand-alone, ONE NIGHT.
Aleatha is a “Published Author’s Network” member of the Romance Writers of America and PEN America. She is represented by Kevan Lyon of Marsal Lyon Literary Agency.
Get Aleatha’d Here: