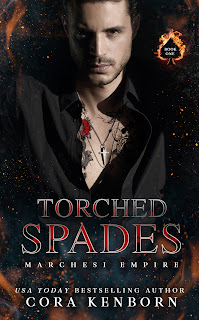 Four months ago, Johnny Malone showed up at my office, flipping a playing card between his fingers like I was wasting his time.

The one a self-confessed arsonist came to for help in controlling his “urges.”

The one he visits every week and undresses with his eyes.

Lethal dark eyes that drown me in fiery lust and constant lies.

But the deeper I sink the more those ethical lines blur, and his charm overshadows his inner demons.

Ones with no family, no friends, and no past.

He’s hiding from something.

And I intend to find out.

No liars.
No patients.

In one afternoon, I broke all three.

They say you should never play with fire…

Now I know why. 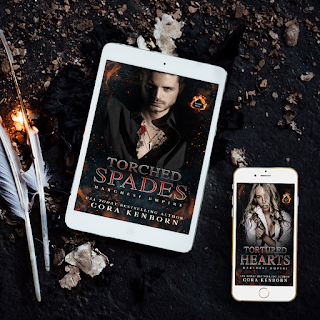 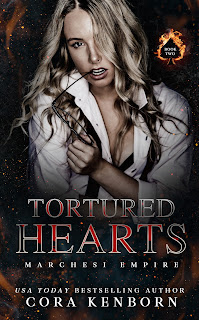 Obsession is the ultimate temptress.

She seduces lies from the honest…

And turns an uptight psychiatrist into a
killer.

I tried to save Becca from the real me…

Heir to a blood-soaked throne.

But the woman I left behind doesn’t want
my salvation.

This time, there will be no lies.

I’m the devil in a designer suit.

She’s sugar-laced sin… And mine.

However, a made man never takes without
consequence.

War is coming for us…

A hailstorm of bullets dripping with debt.

But my Fire Queen has a secret weapon no
steel can match.

A wounded heart is vulnerable…

But a tortured one is deadly. 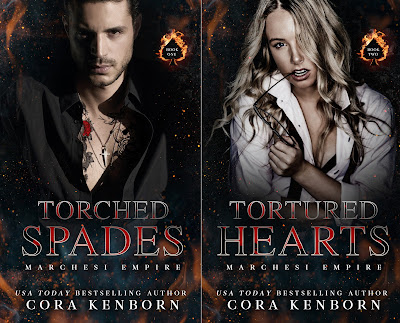 Cora Kenborn is a USA Today Bestselling author who writes in multiple genres from dark and gritty romantic suspense to laugh-out-loud romantic comedy.
Known for her sharp banter and shocking blindsides, Cora pushes her characters and readers out of their comfort zones and onto an emotional roller coaster before delivering a twisted happily ever after.
Cora believes there’s nothing better than a feisty heroine who keeps her alpha on his toes, and she draws inspiration from the sassy country women who raised her. However, since the domestic Southern Belle gene seems to have skipped a generation, she spends any free time convincing her family that microwaving Hot Pockets counts as cooking dinner.
Oh, and autocorrect thinks she’s obsessed with ducks.
Connect with Cora Kenborn
Newsletter | Website | Facebook | Facebook Reader Group | Twitter | Instagram | BookBub    Goodreads | Amazon Author Page
Hosted By: