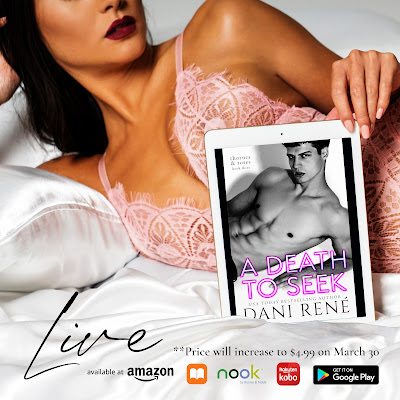 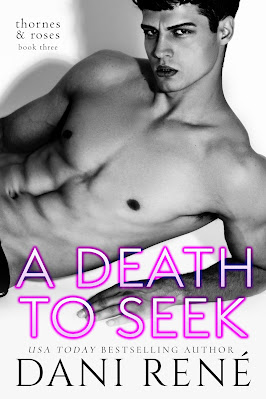 Head back to Thorne Haven in the last book of the series. Follow Finn on his journey of heartbreak, redemption, and a whole lot of secrets!
I spent most of my life keeping a secret. I was ashamed. I was scared. I was broken.
I thought my life was over the moment I met her, but I quickly realized it was only beginning.
She has her own hidden depths in those pretty eyes. And when she learns who I really am, I’m convinced she’ll push me away. But life has taught me to expect the unexpected.
It’s time to stand up for who I am. It’s time to admit who I love. And it’s time to seek love instead of darkness. But nothing is as easy as it seems because things have a way of revealing themselves at the most inopportune times.
Three secrets.
One heartbreak.
And the wedding of a lifetime.


A Death to Seek is the third and final book in the Thornes & Roses Series. This time it is Finn’s story and Zaria’s story.

Finn is to do his duty to the family and marry Zaria Abadi. This is an arranged marriage by their fathers. But Finn has been secretly seeing Jarred.

Zaria moves to Thorne Manor prior to them getting married for them to get to know each other. What she finds is that Finn and Jarred have a thing going.

This is a MMF romance and one of my favorite kinds of reads.

Zaria is addicted to Social Media and it isn’t always for the better. It can bring on very negative thoughts by her after what people think about her.

I really enjoyed Zaria, Jarred and Finn’s story. They make the relationship work and bed@mned what anyone else thinks. I am looking forward to Dani René’s next book, whatever it might be.

A Death To Seek (Thornes and Roses #3) by Dani Rene is Finn’s story. We know from the end of book 2 that Finn’s father has set up an arranged marriage for him and he is definitely not happy about it. We do learn more about who Finn really is in this story. What we have seen of him in the previous books is certainly not who we think he is. Getting to learn who Finn is and his secrets was so good. I most definitely didn’t see that coming. His bride to be has secrets herself. Zara has had to live up to her parents standards and wishes. This arrangement of moving into Thorne Manor before the marriage has her scared and alone. The pressure of living up to everyone else is taking a toll on Zaria. Neither Finn nor Zaria want this marriage and their journey together was entertaining. Many ups and downs. Of all the brothers I liked Finn’s story the best. There was so much to him and his story was so interesting. However towards the end, part of the story got strange and I was left with some questions. But the conclusion of Finn and Zaria’s story was so good. I would love to read more about them and the other brother’s life. 4 stars for me.

Dani is a USA Today Bestselling Author of dark and deviant romance with a seductive edge.
Originally from Cape Town, South Africa, she now lives in the UK with her better half who does all the cooking while she writes all the words.
When she’s not writing, she can be found binge-watching the latest TV series, or working on graphic design either for herself, or other indie authors.
She enjoys reading books about handsome villains and feisty heroines, mostly dark, always seductive, and sometimes depraved. She has a healthy addiction to tattoos, coffee, and ice cream.
You can find more information on her website, www.danirene.com, or find her on social media, Instagram and Facebook being her favorites. Along with her newsletter, which you can sign up for here – https://bit.ly/DaniVIPs 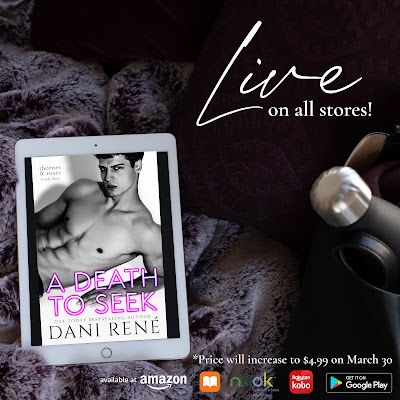