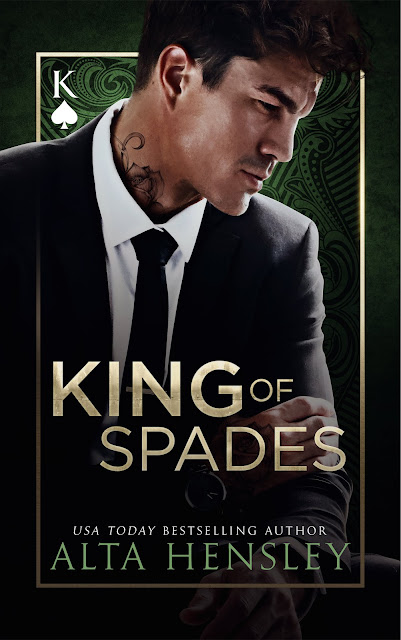 Title: King of Spades
Series: Wonderland Trilogy #1
Author: Alta Hensley
Publisher: Dangerous Press
Genre: Contemporary Romance
Release Date: April 5, 2022
BLURB
Nick Hudson has a dangerous reputation.
That’s what I need if I’m going to survive.
Desperation makes me seek out a ruthlessly powerful billionaire.
I need protection.
He demands my virtue as payment.
I’m falling into a world of luxury and sin.
With every twist and turn, I need more.
Except this is not a man to love.
This is a man to fear.
His obsession grows. So does the threat, until I’m trapped in a world of depravity. I’ll need more than Nick’s strength to survive. I’m going to need his heart.
ADD TO GOODREADS 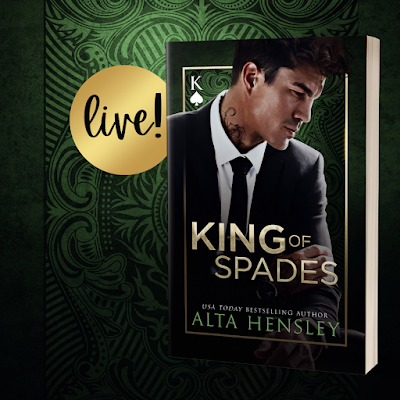 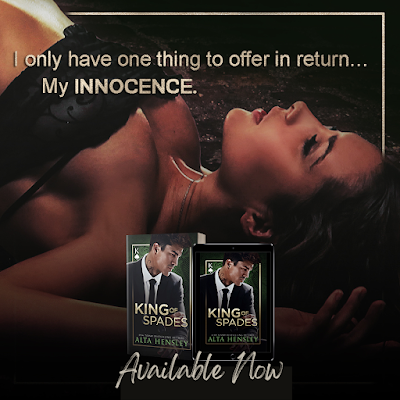 King of Spades by Alta Hensley
My rating: 4 of 5 stars

King of Spades is the first book in the Wonderland Series. The other thing is that this book is a part of the Midnight Dynasty series that is written by various authors.

This is Nick Hudson and Lyriope Bailey’s story. Lyriope is also a Morelli. Her father, Bryant Morelli chooses to ignore that she is a Morelli, since she is illegitimate.

Nick owns Wonderland a VIP club that is private invite only and caters to the rich of the Underworld. Nick collects secrets and information.

Lyriope attends a party for the Morelli’s and she meets Nick. Nick has called off a hit on Lyriope and she wants to know why. He lets her know what he wants within a few minutes of meeting. Nick tells her that he would like to bed (keeping it clean for Amazon) her before she dies. So she is safe for the moment.

She borrowed money from the Russians to help her stepfather. Of course he and her mother are not appreciative and now the Russians are after her and she doesn’t have the money to pay back.

I enjoyed reading Nick and Lyriope’s story. It ends on a cliffhanger! Their story continues in Queen of Hearts and for now I can’t wait for it to come out.

King of Spades by Alta Hensley is the story of Lyriope who just so happens to be the illegitimate daughter of Bryant Morelli. If you haven’t heard that name before there many books which cross several different authors who have written books about this notorious family and I believe I have read them all. Really good books. Whereas the Morellis live the high life,, she has lived in poverty with her little brother, her irresponsible ditzy mother and step father.  Because of her parental units she is in debt with the Russian mob and her real father wants nothing to do with her. However her cousin Sasha Morelli knows of her existence and tries to bring her into the family.  At a family event she meets Nick. He is an enigma. The Mad Hatter. He is the owner of Wonderland, an exclusive club that caters only to VIPs. Nick is smitten by Lyriope and decides to help her out of her situation with the Russians for a price. This story is the beginning of a series. The story ends on a cliffhanger and I certainly will be reading the next book in the saga. Nick is smooth as silk and sexy as sin. Lyriope is a constant contradiction which got on my nerves at times. While Nick is trying to throw her a lifeline, Lyriope acts like she has many options, which she doesn’t. Inspite of Lyriope’s schizophrenic actions the chemistry between her and Nick is undeniable. Looking forward to where the author takes this story. A 3.5 star read for me.
COMING SOON 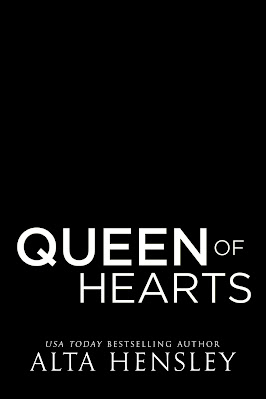 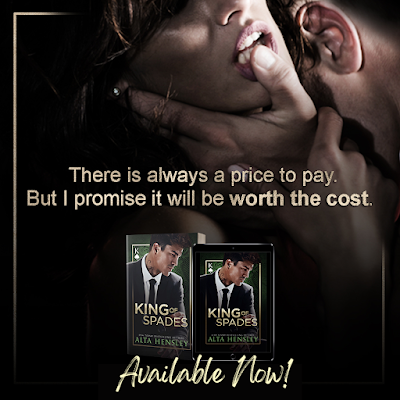 Alta Hensley is a USA TODAY bestselling author of hot, dark and dirty romance. She is also an Amazon Top 100 bestselling author. Being a multi-published author in the romance genre, Alta is known for her dark, gritty alpha heroes, sometimes sweet love stories, hot eroticism, and engaging tales of the constant struggle between dominance and submission.
She lives in a log cabin in the woods with her husband, two daughters, and an Australian Shepherd. When she isn’t battling the bats, and watching the deer, she is writing about villains who always get their love story and happily ever after.