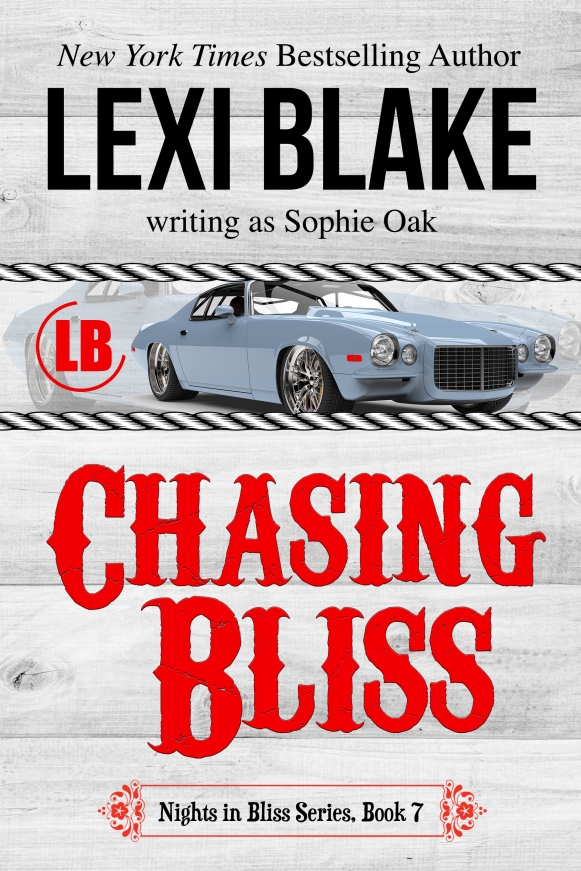 Gemma Wells came to Bliss, Colorado, after a scandal cost her everything. Utterly lost, the disgraced attorney built walls so high that she thinks no one can get through them. She’s given up on love, friendship, and all matters of the heart.

Jesse McCann and Cade Sinclair have floated through life, enjoying the world around them, but never allowing themselves to become a part of it. One look at the pretty attorney and Jesse realizes he’s finally found a reason to stay put. Cade isn’t so sure. He’s crazy about her, but he also knows he doesn’t deserve her.

As they begin to find their way together, a dark secret from Gemma’s past threatens to wreck their futures. Her ex-fiancé is back, bringing danger with him, and their time is running out. Jesse and Cade have to melt this Ice Queen’s heart, or she might not leave Bliss alive.

Dumb. That was dumb. There wasn’t any music. The jukebox had gone silent five minutes before and no one had approached it since. She was so stupid.

Cade turned from her, his hand going into his pocket. He walked away, her whole soul flattening. She didn’t even get an answer.

He walked straight to the jukebox, putting some money in and in a few seconds, a slow, sultry beat started to pound out. Cade turned back to her, holding out a single, callused, deeply masculine hand. God, she was fascinated by that hand. “Are you sure? I don’t know what I can offer you.”

She wasn’t sure of anything except the fact that if she walked out now she would hate herself forever. She might be able to forgive herself if she got played, but not if she didn’t try. She’d always tried. She’d wanted to be a lawyer so she’d applied to Harvard. She hadn’t let the fact that she didn’t have the money faze her. She’d gone for it. When she’d decided she wanted to marry Patrick, she’d told him they should get married.

She’d spent her whole life chasing what she wanted. Why couldn’t she ask for this?

“I’m not sure of anything.” She didn’t bother to hide her emotions. He’d been honest. She could be, too. “I’m scared out of my mind, but I want to dance. And I want a night with you both. Is that too much to ask? I won’t require anything from you but tonight, Cade Sinclair.”

She felt Jesse’s arms wrap around her waist. Pure pleasure. She was drawn back into his heat, his body. And Cade crowded her front. He put his forehead to hers, nuzzling her sweetly.

“I’ll dance with you. I should warn you, I’m not good. But I’ll dance as long as you like.” Cade pressed his body to hers, his hips swaying lightly. Jesse moved behind her.

The sweetness of the moment assailed her. She let one arm wrap around Jesse and the other drift around Cade as the music flowed over her. Her feet moved in time over Trio’s hardwood floors. She barely noticed when other couples joined them. Couples? Trios. Laura Niles danced with her men, her body moving easily. Alexei Markov held Holly Lang as he swayed to the music. And Caleb Burke kind of, sort of, moved behind her.

And she was surrounded by Jesse and Cade. She knew she should feel self-conscious, but it was hard when all she wanted to do was melt into them. Jesse’s hands molded her curves, skimming along her hips. Cade, who said he couldn’t dance, moved with such grace, his lean body picking up the beat and giving her something to follow. His chest pressed against hers, making her nipples peak. It wasn’t a dance so much as a seduction. Jesse and Cade surrounded her, not leaving an inch between them.

She let her arms tighten around them.

Every inch of her body heated up. She felt drunk, but she hadn’t had that much to drink. She wasn’t drunk on alcohol. She was drunk on them, on what they represented.

Tomorrow was supposed to be her wedding day. She should have been preparing to walk down the aisle, but tonight she felt. Felt.

Every choice she’d made had been logical—from where she’d decided to work, to her groom, to the dress she’d bought.

She let her head drift back, leaning against Jesse while she pulled Cade in. There was nothing logical about this. She wasn’t planning on staying in Bliss. She had nothing in common with the men.

Except she wanted them, and they seemed to want her.

She didn’t have to put a time limit on it. She could get her heart ripped out. She could completely fuck up. The world could end. Anything could happen.

And that was okay.

She suddenly didn’t need to know what would happen the next day or the next. She could live in the moment. She could embrace this weird life. No commitments. No promises. Just life.

Was that what her mother had been trying to teach her?

It didn’t matter. She took a deep breath and gave in. She wrapped her arms around Cade’s big body. He was so tall he made her feel petite. And Jesse was broad and built like a linebacker.

“Are you ready to get out of here?” Cade asked.

She nodded. “Can we go back to my place?”

“We can go anywhere you want.” Jesse’s lips played along her ear.

It was crazy. It was wild. It was everything she needed tonight.

Chasing Bliss is the 7th book in the Nights of Bliss series. Sophie Oak/Lexi Blake you blow me away with your Dedications. They always leave me tearful.

This is Gemma Wells, Jesse McCann and Cade Sinclair’s story. Gemma is an attorney, running away from a scandal. Jesse and Cade are living in Bliss working as mechanics.

I love this town of Bliss! Where else can you go that you get a two-fer? 2 HAWT men for 1 woman.

We have heard of both Jesse & Cade in the previous book. Jesse knows immediately that Gemma is his one and Jesse is willing and wants to share with Cade. But Cade doesn’t think he is worthy of her love and he keeps trying to run even though he is very attracted to Gemma.

When someone is attempting to get rid of Gemma. Jesse and Cade are trying to protect her.

Gemma is a strong woman but she can become a hot, quivering mess in the bedroom with these 2 tough guys.

As per usual Sophie Oak aka Lexi Blake leaves me in the same condition as Gemma by the time I am finished reading her books! 4.5 stars