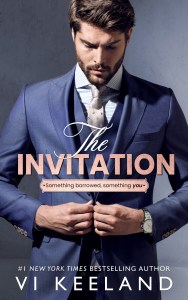 Title: The Invitation
Author: Vi Keeland
Genre: Standalone Contemporary Romance
Release Date: January 18, 2021
BLURB
The first time I met Hudson Rothschild was at a wedding. I’d received an unexpected invitation to one of the swankiest venues in the city.
Hudson was a groomsman and quite possibly the most gorgeous man I’d ever laid eyes on. He asked me to dance, and our chemistry was off the charts.
I knew it wasn’t a good idea to get involved with him, considering the wedding I was at. But our connection was intense, and I was having a great time.
Though the fun came to a screeching halt when Hudson figured out I wasn’t who I’d said I was. You see, that unexpected invitation I received? Well, it hadn’t actually been addressed to me—it was sent to my ex-roommate who’d bounced a check for two months’ rent and moved out in the middle of the night. I figured she owed me an expensive night out, but I guess, technically, I was crashing the wedding.
Once caught, I couldn’t get out of there fast enough. As I bolted for the door, I might’ve plucked a few bottles of expensive champagne off the tables I passed, all while the gorgeous, angry groomsman was hot on my tail.
Outside, I jumped into a taxi. My heart ricocheted against my ribs as we drove down the block—but at least I’d escaped unscathed.
Or so I thought.
Until I realized I’d left my cell phone behind at the table.
Take one guess who found it?
This is the crazy story of how Hudson Rothschild and I met. But trust me, it’s only the tip of the iceberg.
ADD TO GOODREADS

The Invitation by Vi Keeland. The premise for this book reminded me of a stroyline I had read before so I was apprehensive. Wasn’t sure if this was going to be a another one of those stories. I can tell you definitely it is not. Another extremely funny, comical, loving and touching story with a twist. Since her ex roommate stiffed her she decides to crash a fabulous wedding the roommate was invited to. Imagine getting caught and put on the spot.  Hilarious! To compound matters Stella left her phone at the wedding and has to retrieve it from the handsome and wealthy Hudson. The man who she not only danced with flirted with but is the brother of the bride and to compound the matter he was the one who put her on the spot. The attraction between the two was evident. When their paths cross again and they end up working together the fun really begins. Add in a smart mouth 6 year old daughter and the story gets even better. The twist to the story was something that had my head spinning. I happened to be in the shower when it hit me and I was like “holy toledo batman”. I was floored. This author never disappoints. Yes this story was nothing like what I initially thought. So much going on that had me smiling, laughing, swooning and hurting. Just a really enjoyable story that had me from page 1 till the end. Another 5 star read. Hold on to your hats and be prepared to have your world rocked.

Another wonderful book by Vi Keeland. I loved how different this book was. Never would I have thought reading other people’s diary could be a hobby. Now I want to pick it up. Lol. I felt the chemistry between Hudson and Stella. I’m not going to lie I did not like Hudson in the beginning but he grew on me. I expected the twist but I didn’t expect the outcome. It just showed that sometimes there are some pain with happiness. I would definitely recommend this book, well any book by Vi to others.

Vi Keeland is a #1 New York Times, #1 Wall Street Journal, and USA Today Bestselling author. With millions of books sold, her titles have appeared in over a hundred Bestseller lists and are currently translated in twenty-five languages. She resides in New York with her husband and their three children where she is living out her own happily ever after with the boy she met at age six.
AUTHOR LINKS
FACEBOOK
PROFILE / PAGE / GROUP
WEBSITE
TWITTER
INSTAGRAM
GOODREADS

OTHER BOOKS BY VI