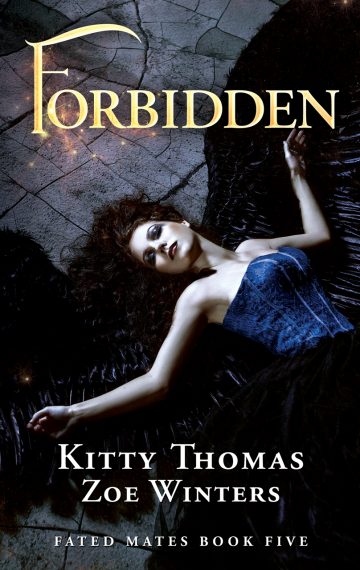 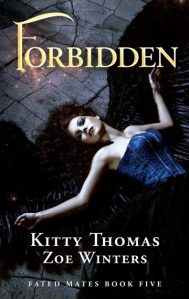 To see him again is forbidden…

Angeline knows Father Hadrian will never forgive her for their ugly history. Taking him from his calling and turning him into a monster… no one should forgive that. When the king of the vampires seeks vengeance for Hadrian’s recent betrayal, she’ll risk everything to protect the vampire she still loves.

But when Angeline agrees to give Hadrian her blood, all Heaven will break loose.

Note: This title was originally published by Zoe Winters (The same person as Kitty Thomas) as Forbidden, Preternaturals Book 5.) All content from the original book remains the same. This book can be read as a standalone. No cliffhangers, each book has a full and complete HEA.

Forbidden is the fifth book in the Fated Mates Series. Forbidden actually starts off with Dark Mercy a 0.5 story Novella that has been added to Forbidden and is the beginning story of Father Hadrian and Angeline. It started out in 1955 when Angeline decided to make Hadrian hers. Angeline is half demon, vampire and half human. Angeline just wanted someone to love her.

Present day – Hadrian has been banished from the Vampire King’s court.

I think one of my favorite lines in this book is. “Forgive me, Father, for I’m about to sin.” Very appropriate!

Things kind of backfired on Angeline and Hadrian hates her for turning him and he kills her. Somehow she ends up being an angel. She is back to warn Father Hadrian of the plans for the King of the vampires to kill him.

I loved this story and this series so far. I love how Kitty/Zoe brings in all the paranormal, witches, sorcerers, vampires, werewolves and a lot of other shapeshifters and such. 4.5 Stars

I am looking forward to reading Caged Moon, the last of this series.

FYI – Kitty Thomas wrote this book originally under the name of Zoe Winters when she was trying to separate the genre’s that she writes. Now she is trying to bring the 2 names together.

WHAT READERS ARE SAYING

(some of these reviews are pulled from the original release.)

A very important book in the series to understand more of the lore and how the angels fit into the bigger picture.” – Lara, Goodreads

The D/s subtext is really good. Angeline is such a sweet hearted girl, and she’s already given herself to Hadrian 60 years before. She is willing to take anything he’ll let her have to be with him.” -Poison, Goodreads

Warning: Do not attempt to read this book before bed if you work tomorrow unless you like looking like a zombie on too much caffeine.

I started reading Forbidden last night and thought to read I figured I’d read 20 pages or until I started getting sleepy. It didn’t quite work out that way I turned the last page just as the sun rose this morning. It was that good. I got totally lost in the story and lost track of time, it’s been awhile since that has happened.” -ChattyKat, Goodreads

Loved it… While this was the first book I read of this series, I did not feel as I was missing anything, other than to say I will be buying books 1-4 now! This is an an amazing love story that takes decades to get both parties to see it!” -Aimz, Goodreads