Jasper Jenkins is one of the younger Gargoyle in the Stone Society, but he is a Goyle with a secret past. A past that comes back to not only haunt but terrorize him and his mate. Being the only openly gay member of the New Atlanta clan Jasper is beyond thrilled when he discovers the fates have chosen him a mate. Unfortunately for him, his mate is a human and not yet open about his own sexuality nor is he aware of the existence of the Gargoyle.

Trevor McKenzie is the assistant Medical Examiner and works along side full-blood Gargoyle and member of the Stone Society, Dante Di Pietro in the morgue. He considers himself a loner and his only friends to be his brother Travis and the bodies that lay on his slab. That is until he meets the “badass” police detective Jasper Jenkins. The two form a friendship and while Trevor feels the pull to Jasper he has no idea that is the pull of the mate bond. As the story unfolds, Trevor learns the truth of the Gargoyle and the “league of badases” (otherwise known as the Stone Society) and is thrust into their world when the demons from Jasper’s past come back with a vengeance.

I say it with every new edition of the Stone Society Series, and I am thrilled to say it again, Jasper is my new favorite story in the series (but Frey is till my favorite Goyle). Jasper’s story has been building throughout the series and I have been (rather impatiently) waiting to learn more about this sexy ginger Goyle.

Faith Gibson’s storytelling and imagination are on point in this book. She reaches back into the past some 400+ years in Ireland and brings us back into the future of New Atlanta and she does it beautifully. As she relates the details of Jasper’s life in the old world, I imagined myself a spectator on the sidelines in awe of the scene before me.

That being said, Jasper is more than just a kick@ss action packed, paranormal read, it’s also a sexy love story. Some readers may be hesitant to read a M/M romance, but I assure you, the respect, devotion and love between Jasper and Trevor transcends labels and is on par with any of today’s more “traditional” M/F love stories.

While Jasper is a part of the Stone Society Series, there is enough backstory within this book to read as a standalone if you haven’t read the first five yet. Although I would ask, what you are waiting for? I urge anyone with a passion for well written stories to pick up your copy of Jasper today, you will not be disappointed. As I read the last words of Jasper, I began to itch for the next installment of the Stone Society and I know that author Faith Gibson will once again take me on a journey full of excitement and adventure.

I most definitely Jasper 5 stars, would love to give it so many more.

**I was gifted a complimentary copy of this book in exchange for an honest review. I enjoyed this book so much I have my eCopy on preorder! 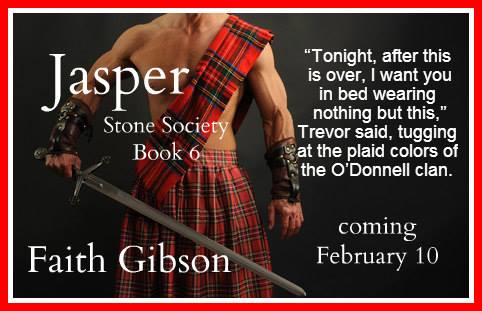