Author: Red Phoenix
Genre: New Adult BDSM Romance
Release Date: October 15, 2019
Blurb
“Welcome me home…”
I am deeper in love with Thane after the birth of our child, and I can’t believe the plans he has for our future. This is the stuff dreams are made of!
My joy is doubled when Rytsar Durov returns as a conquering hero.
In the midst of such bliss, a dark secret surfaces that has the power to tear our world apart.
Love has always been the cornerstone my submissive journey, and now I must make a heartbreaking choice.
What would you sacrifice for love?
ADD TO GOODREADS

Excerpt
Rytsar turned to Brie with a wild gleam in his eyes, shouting, “Bezhat!”
She backed away from him, knowing he had commanded her to run, but it wasn’t until he lunged for her that she understood he was serious.
Her heart pounding in her chest, she looked at Sir and saw the same wild look in his eyes.
When both men started toward her as one unit, she suddenly understood what was happening.
This was her warrior fantasy being played out. Only, instead of one warrior wanting to claim her—she had two.
Brie immediately kicked off her sandals and turned, bolting toward the door. She flung it open with an excited squeal and she raced out of the house with both of them pursuing her.
Feeling the thrill of the chase, she ran as fast as she could down the sandy beach, trying to stay out of the reach of both men. She remembered how quickly Rytsar had captured her the first time and was determined not to be caught so easily this time around.
She could sense Sir and Rytsar drawing nearer and felt chills when one of their hands brushed against her skin as he reached out to grab her.
Remembering that the waves had tripped her up last time, Brie did her best to keep close to the edge of the shore on the firmer wet sand without getting too close to the water’s edge.
Unfortunately, it didn’t take long before her lungs began to burn.
Slowing down momentarily was enough to give her pursuers the advantage. Brie cried out when she felt the tight hold of Sir’s hand gripping her arm. She twisted around, trying to free herself, only to feel Rytsar wrap his arms around her waist as he carried her toward the water and flung her into the ocean.
She was hit by a wave as she scrambled back to the safety of the shore. An intoxicating thrill of fear took over when Rytsar grabbed both her feet and pulled her to him.
Brie let out a terrified scream when he flipped her over and Sir held her down by her wrists. Rytsar crushed her body with his weight.
She gasped for breath as another wave swirled around them and she looked up into her captor’s intense blue eyes.
There was a hint of fierceness in his gaze that caused her heart to race even more. Rytsar was a dangerous man, capable of great violence, but he was also a man of extreme passion and fierce love.
No matter how savage his soul, Brie would always trust him.
He leaned down and bit her neck while Sir tilted her head to get better access to her lips, claiming her mouth.
Brie was overwhelmed by the sense of helplessness caused by Rytsar’s teeth bruising her skin and Sir’s tongue ravaging her mouth. It was so fucking hot, knowing both men desired her.

Tied to Hope by Red Phoenix

Tied to Hope is Brie’s Submission 18th book. I am so blown away (in a good way). I think Brie’s story is amazing and that Brie’s story has made it to 18 books! Brie & Sir Thane have a baby and her name is Hope.

Rystar has some stuff to deal with and thankfully he has friends like Thane and Brie. Lord knows they make up some of the best scenes all together!

It’s fun to have all of the gang back from The Submissive Training Center. Mary & Lea, Marquis Gray, Ms. Clark, Master Coen, Tono. I hope I didn’t leave anyone out!

Brie’s story is sentimental, cheerful, passionate, humorous, & heart warming. Tied to Hope was such a great book and I can’t wait to read more from this series! 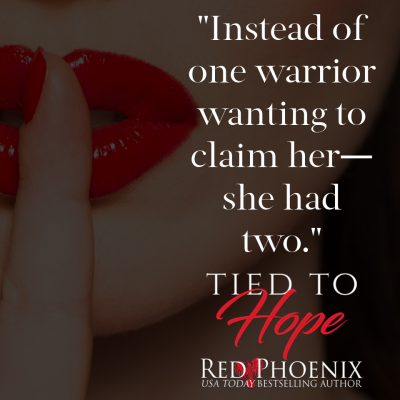