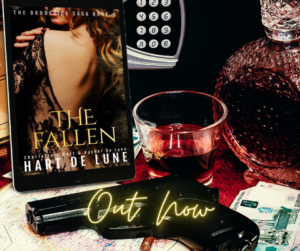 Book 4 in The Broderick Series 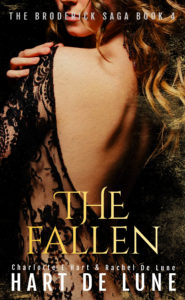 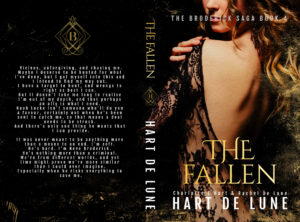 Vicious, unforgiving, and chasing me.

Maybe I deserve to be hunted for what I’ve done, but I got myself into this and I intend to find my way out. I have a target to hunt, and wrongs to right as best I can. But it doesn’t take me long to realise I’m out of my depth, and that perhaps an ally is what I need.

Noah Locke isn’t someone who’ll do you a favour, certainly not when he’s been sent to catch me, so that means a deal needs to be struck.

And there’s only one thing he wants that I can provide.

We’re from different worlds, and yet time might prove we’re more similar than I could ever imagine.

Especially when he risks everything to save me.

The Fallen (The Broderick Saga Book 4) by Charlotte E Hart and Rachel De Lune is the conclusion to this series and Neve’s story. Picking up where book 3 left off. Neve is on the run and Landon has given Noah Locke the task of finding her and bringing her back to him. We know very little about Locke except he does Landon’s dirty work. In this book we get to see who Noah Locke actually is. When he finds Neve she makes a proposal to Noah to help her prove her innocence. There is not much Noah needs. He lives a very simple life and Landon pays him really well so money isn’t something he needs. So what is left for Neve to offer. As we learn more about Neve ,who she is, her place in the family and how she got to the point of standing over her dead father’s body we are treated with a very good story.  Than add Neve’s relationship with Noah while we learn more about how he ened up as Landon’s henchmen, we see how opposites attract.  Loved the steamy connection between Neve and Noah.  He is all kinds of yummy with the looks of a model and a body to match; his looks definitely don’t fit his brooding persona. The conclusion of their story was cute as well we are given a wrap of each of the other siblings. Just clever. Wouldn’t mind a peak of the siblings life after their HEA.  A 4 star read for me.

The Fallen by Charlotte E. Hart
Tanya’s rating: 4 of 5 stars

Fallen is the 4th book in The Broderick Saga Series and is the conclusion in this series. This is Noah Locke and Neve Broderick’s, the youngest sister’s turn for her story to be told. This book also covered all the sibling’s updates which was great!

No cliffhanger with this story since it is the conclusion and we get our HEA!

Neve has had a falling out with her family. She is in trouble and she is in hiding. Noah works for Neve’s brother Landon. He has been sent on a mission to find her and bring her home. Neve says she isn’t guilty and as Noah starts to fall in love with her he is starting to believe her.

It was great to read Neve’s story. She and Noah had a great chemistry together.

Families are complicated, especially when they’re built on scandals, secrets and lies. 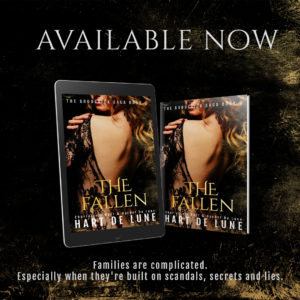